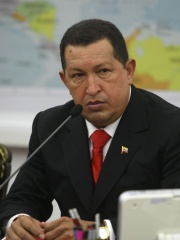 Hugo Rafael Chávez Frías (, Spanish pronunciation: [ˈuɣo rafaˈel ˈtʃaβes ˈfɾi.as] (listen); 28 July 1954 – 5 March 2013) was a Venezuelan politician who was president of Venezuela from 1999 until his death in 2013 except for a brief period in 2002. Chávez was also leader of the Fifth Republic Movement political party from its foundation in 1997 until 2007, when it merged with several other parties to form the United Socialist Party of Venezuela (PSUV), which he led until 2012. Born into a middle-class family in Sabaneta, Barinas, Chávez became a career military officer and, after becoming dissatisfied with the Venezuelan political system based on the Puntofijo Pact, founded the clandestine Revolutionary Bolivarian Movement-200 (MBR-200) in the early 1980s. Read more on Wikipedia

Since 2007, the English Wikipedia page of Hugo Chávez has received more than 5,164,103 page views. His biography is available in 128 different languages on Wikipedia making him the 422nd most popular politician.

Among politicians, Hugo Chávez ranks 418 out of 14,801. Before him are Şehzade Bayezid, Yongle Emperor, Xanthippe, Charles III of Spain, Frederick III, German Emperor, and Matthias, Holy Roman Emperor. After him are Frederick I of Prussia, Edward II of England, Benjamin Netanyahu, Artaxerxes I of Persia, Merneptah, and Francis II, Holy Roman Emperor.