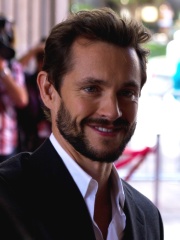 Hugh Michael Horace Dancy (born 19 June 1975) is an English actor who rose to prominence for his role as the titular character in the television film adaptation of David Copperfield (2000) as well as for roles in feature films as Sfc. Kurt Schmid in Black Hawk Down (2001) and Prince Charmont in Ella Enchanted (2004). Other film roles include Joe Conner in Shooting Dogs (2005), Grigg Harris in The Jane Austen Book Club (2007), Luke Brandon in Confessions of a Shopaholic (2009), Adam Raki in Adam (2009) and Ted in Martha Marcy May Marlene (2011). Read more on Wikipedia

Since 2007, the English Wikipedia page of Hugh Dancy has received more than 5,661,876 page views. His biography is available in 36 different languages on Wikipedia making him the 3,266th most popular actor.