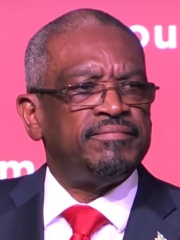 Hubert Alexander Minnis, ON (born 16 April 1954) is a Bahamian politician and doctor who served as Prime Minister of the Bahamas from May 2017 to 16 September 2021. Minnis is the leader of the Free National Movement, the former governing party, and the Member of Parliament for the New Providence constituency of Killarney. First elected to the legislature in the 2007 election, he succeeded Hubert Ingraham as party leader following the party's defeat in the 2012 election.He was dismissed from his leadership role in the FNM in December 2016, and regained the position in April 2017 after much internal conflict within the party. Read more on Wikipedia

Others born in The Bahamas

Among POLITICIANS In The Bahamas