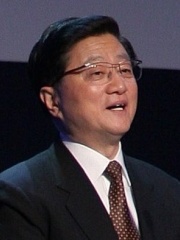 Huang Ju (28 September 1938 – 2 June 2007) was a Chinese politician and a high-ranking leader in the Communist Party of China. He was a member of the Politburo Standing Committee, China's top decision making body, between 2002 and 2007, and also served as the first-ranked Vice Premier of the People's Republic of China beginning in 2003. He died in office before he could complete his terms on the Standing Committee and as Vice-Premier.An electrical engineer by trade, Huang was a close confidante of party leader Jiang Zemin, to whom he owed his rise to power. Read more on Wikipedia

Since 2007, the English Wikipedia page of Huang Ju has received more than 62,170 page views. His biography is available in 19 different languages on Wikipedia making him the 11,338th most popular politician.

Among politicians, Huang Ju ranks 11,273 out of 14,801. Before him are Étienne Mourrut, Chang Taek-sang, Miguel Ángel Juárez Celman, Harriet Lane, Irakli Tsereteli, and Enlil-nasir I. After him are Hans Enoksen, Prince Aribert of Anhalt, José María Gil-Robles, Helen Herron Taft, Robert of Vermandois, and Seewoosagur Ramgoolam.