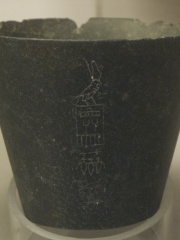 Hotepsekhemwy is the Horus name of an early Egyptian king who was the founder of the Second Dynasty of Egypt. The exact length of his reign is not known; the Turin canon suggests an improbable 95 years while the ancient Egyptian historian Manetho reports that the reign of "Boëthôs" lasted for 38 years. Egyptologists consider both statements to be misinterpretations or exaggerations. Read more on Wikipedia

Hotepsekhemwy was the 2nd pharaoh of the Second Dynasty. His name means "The two powers are in harmony".

Page views of Hotepsekhemwies by language

Among politicians, Hotepsekhemwy ranks 1,865 out of 15,710. Before him are Juba II, Rodolfo Graziani, Joseph I of Portugal, Laurent-Désiré Kabila, Agostinho Neto, and Ashurnasirpal II. After him are Tiglath-Pileser I, Archduke Maximilian Francis of Austria, Gurbanguly Berdimuhamedow, Julia Drusilla, Michael the Brave, and Mohammed Daoud Khan.