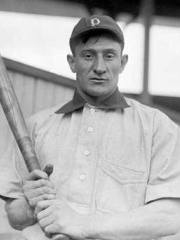 Johannes Peter "Honus" Wagner (; February 24, 1874 – December 6, 1955), sometimes referred to as "Hans" Wagner, was an American baseball shortstop who played 21 seasons in Major League Baseball from 1897 to 1917, almost entirely for the Pittsburgh Pirates. Wagner won his eighth (and final) batting title in 1911, a National League record that remains unbroken to this day, and matched only once, in 1997, by Tony Gwynn. He also led the league in slugging six times and stolen bases five times. Read more on Wikipedia

Among politicians, Honus Wagner ranks 11,656 out of 15,710. Before him are Dmitry Sipyagin, Viggo Kampmann, Marwan Barghouti, Leofric, Earl of Mercia, Agnes of Babenberg, and Gustav Neumann. After him are Godfrey Binaisa, Rafi ud-Darajat, Christiane Taubira, Spyridon Trikoupis, Klavdiya Boyarskikh, and Panagiotis Kanellopoulos.