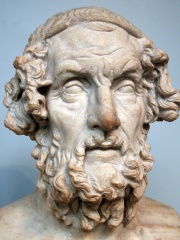 Homer (; Ancient Greek: Ὅμηρος [hómɛːros], Hómēros) is the legendary author to whom the authorship of the Iliad and the Odyssey (the two epic poems that are the foundational works of ancient Greek literature) is attributed. He is regarded as one of the greatest and most influential authors of all time. In Dante Alighieri's Divine Comedy, Virgil refers to him as "Poet sovereign", king of all poets; in the preface to his translation of the Iliad, Alexander Pope acknowledges that Homer has always been considered the "greatest of poets".The Iliad is set during the Trojan War, the ten-year siege of the city of Troy by a coalition of Mycenaean Greek kingdoms. Read more on Wikipedia

Homer is most famous for his epic poem, The Odyssey.

Page views of Homers by language

Others Deceased in 750 BC