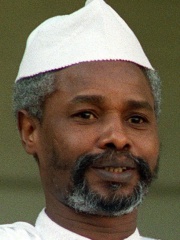 Hissène Habré (Arabic: حسين حبري Ḥusaīn Ḥabrī, Chadian Arabic: pronounced [hiˈsɛn ˈhabre]; French pronunciation: ​[isɛn abʁe]; 13 August 1942 – 24 August 2021), also spelled Hissen Habré, was a Chadian politician and convicted war criminal who served as the 5th president of Chad from 1982 until he was deposed in 1990. A member of Chad's northern population, Habré joined FROLINAT rebels in the first Chadian Civil War against the southern-dominated Chadian government. Due to a rift with fellow rebel commander Goukouni Oueddei, Habré and his Armed Forces of the North rebel army briefly defected to Felix Malloum's government against Oueddei before turning against Malloum, who resigned in 1979. Read more on Wikipedia

Hissène Habré is most famous for being the president of Chad from 1982 to 1990.

Among politicians, Hissène Habré ranks 3,686 out of 15,710. Before him are Condoleezza Rice, Seleucus III Ceraunus, Sophia of Prussia, Heracles of Macedon, Çandarlı Halil Pasha the Younger, and Gelon. After him are Magnus, Duke of Holstein, Hjalmar Siilasvuo, Norodom of Cambodia, Latife Uşşaki, Frederick IV, Duke of Holstein-Gottorp, and Hetepheres I.

Others born in Chad

Among POLITICIANS In Chad