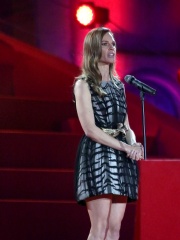 Hilary Ann Swank (born July 30, 1974) is an American actress and film producer. She is the recipient of numerous awards for her career, including two Academy Awards, two Golden Globe Awards, two Critics' Choice Awards, and a Screen Actors Guild Award. Swank made her film debut with a minor role in Buffy the Vampire Slayer (1992), before receiving her breakthrough role in the fourth installment of The Karate Kid franchise, The Next Karate Kid (1994). Read more on Wikipedia

Since 2007, the English Wikipedia page of Hilary Swank has received more than 6,983,113 page views. Her biography is available in 79 different languages on Wikipedia making her the 1,153rd most popular actor.