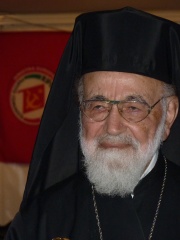 Hilarion Capucci (in Arabic:هيلاريون كابوتشي) (2 March 1922 – 1 January 2017) was a Syrian Catholic bishop who served as the titular archbishop of Caesarea in the Melkite Greek Catholic Church. Read more on Wikipedia

Since 2007, the English Wikipedia page of Hilarion Capucci has received more than 83,501 page views. His biography is available in 15 different languages on Wikipedia making him the 1,637th most popular religious figure.