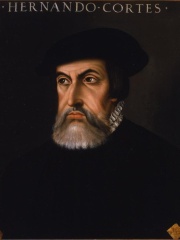 Hernán Cortés de Monroy y Pizarro Altamirano, 1st Marquess of the Valley of Oaxaca (; Spanish: [eɾˈnaŋ koɾˈtez ðe monˈroj i piˈθaro altamiˈɾano]; 1485 – December 2, 1547) was a Spanish Conquistador who led an expedition that caused the fall of the Aztec Empire and brought large portions of what is now mainland Mexico under the rule of the King of Castile in the early 16th century. Cortés was part of the generation of Spanish explorers and conquistadors who began the first phase of the Spanish colonization of the Americas. Born in Medellín, Spain, to a family of lesser nobility, Cortés chose to pursue adventure and riches in the New World. Read more on Wikipedia

Since 2007, the English Wikipedia page of Hernán Cortés has received more than 6,082,638 page views. His biography is available in 129 different languages on Wikipedia making him the 8th most popular explorer.

Among explorers, Hernán Cortés ranks 8 out of 367. Before him are Christopher Columbus, Ferdinand Magellan, Vasco da Gama, Roald Amundsen, Amerigo Vespucci, and James Cook. After him are Ibn Battuta, Bartolomeu Dias, Zheng He, Francis Drake, Francisco Pizarro, and Fridtjof Nansen.

Among EXPLORERS In Spain