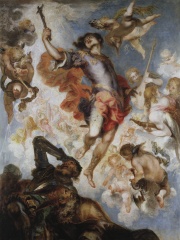 Saint Hermenegild or Ermengild (died 13 April 585; Spanish: San Hermenegildo; Latin: Hermenegildus, from Gothic *Airmana-gild, "immense tribute"), was the son of king Liuvigild of the Visigothic Kingdom in the Iberian Peninsula and southern France. He fell out with his father in 579, then revolted the following year. During his rebellion, he converted from Arianism to Chalcedonian Christianity. Read more on Wikipedia

Hermanegild was the son of King Leovigild and the brother of King Recared. He was the first Visigoth king to convert to Catholicism.

Page views of Hermenegilds by language

Among religious figures, Hermenegild ranks 832 out of 2,272. Before him are Angela of Foligno, Menachem Mendel Schneerson, Carlos Filipe Ximenes Belo, Paul of Samosata, Mary of Jesus de León y Delgado, and Giuseppe Moscati. After him are Stanislaus Kostka, Leonardo Boff, Heinrich Bullinger, Odile of Alsace, Benedict of Aniane, and Fatimah bint Musa.