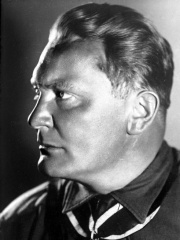 Hermann Wilhelm Göring (or Goering; German: [ˈɡøːʁɪŋ] (listen); 12 January 1893 – 15 October 1946) was a German political and military leader and a convicted war criminal. Göring was one of the most powerful figures in the Nazi Party, which ruled Germany from 1933 to 1945. A veteran World War I fighter pilot ace, he was a recipient of the Pour le Mérite ("The Blue Max"). Read more on Wikipedia

Hermann Göring was a Nazi military commander and the second-highest ranking member of the Nazi Party. He was convicted of war crimes and crimes against humanity at the Nuremberg Trials and sentenced to death by hanging.

Among politicians, Hermann Göring ranks 130 out of 15,710. Before him are Kösem Sultan, Vespasian, Cardinal Richelieu, Hatshepsut, Alfred the Great, and Gustavus Adolphus of Sweden. After him are Amenhotep III, Ferdinand I, Holy Roman Emperor, Mehmed III, Skanderbeg, Maximilian I, Holy Roman Emperor, and Deng Xiaoping.