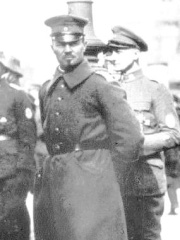 Hermann Ehrhardt (29 November 1881 – 27 September 1971) was a German Freikorps commander during the period of turmoil in Weimar Republic Germany from 1918 to 1920, he commanded the famous II.Marine Brigade, better known as the Ehrhardt Brigade or Marinebrigade Ehrhardt. Born in Diersburg, now part of Hohberg, Baden-Württemberg, he served in the German Imperial Navy as a Korvettenkapitän. At the Battle of Jutland in May 1916 he commanded the 17th half-flotilla of the IX. Torpedo-boat Flotilla; his flagship, SMS V27 was sunk in action. Read more on Wikipedia

Among military personnels, Hermann Ehrhardt ranks 803 out of 1,466. Before him are Reinhard Hardegen, Marie-Pierre Kœnig, Gunichi Mikawa, Radko Dimitriev, Karl Ernst, and Bertram Ramsay. After him are Alexander Haig, Baji Rao I, Presian, Duško Popov, Henri Winkelman, and Ding Ruchang.