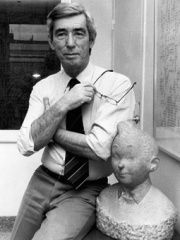 Georges Prosper Remi (French: [ʁəmi]; 22 May 1907 – 3 March 1983), known by the pen name Hergé (; French: [ɛʁʒe]), from the French pronunciation of his initials, was a Belgian cartoonist. He is best known for creating The Adventures of Tintin, the series of comic albums which are considered one of the most popular European comics of the 20th century. He was also responsible for two other well-known series, Quick & Flupke (1930–1940) and The Adventures of Jo, Zette and Jocko (1936–1957). Read more on Wikipedia

Since 2007, the English Wikipedia page of Hergé has received more than 1,112,597 page views. His biography is available in 64 different languages on Wikipedia (up from 61 in 2019). Hergé is the 3rd most popular comic artist, the 30th most popular biography from Belgium (down from 27th in 2019) and the most popular Belgian Comic Artist.

Page views of Hergé by language

Among comic artists, Hergé ranks 3 out of 174. Before him are Stan Lee and Albert Uderzo. After him are René Goscinny, Osamu Tezuka, Joseph Barbera, Carl Barks, Akira Toriyama, Jean Giraud, Matt Groening, Peyo, and Hugo Pratt.

Among COMIC ARTISTS In Belgium