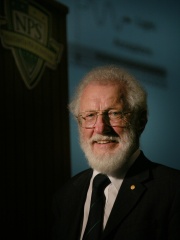 Herbert Kroemer (born August 25, 1928) is a German-American physicist who, along with Zhores Alferov, received the Nobel Prize in Physics in 2000 for "developing semiconductor heterostructures used in high-speed- and opto-electronics". Kroemer is professor emeritus of electrical and computer engineering at the University of California, Santa Barbara, having received his Ph.D. in theoretical physics in 1952 from the University of Göttingen, Germany, with a dissertation on hot electron effects in the then-new transistor. Read more on Wikipedia

Herbert Kroemer was a German-born American physicist and Nobel laureate. He is most famous for his invention of the MOSFET (Metal Oxide Semiconductor Field Effect Transistor) and for his work in quantum electronics.