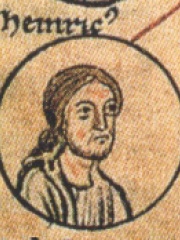 Henry of Speyer (German: Heinrich von Speyer, also Heinrich von Worms; c. 970 – 989/992), a member of the Salian dynasty, was count in the Rhenish Franconian Wormsgau. He was the father of Emperor Conrad II. According to the 977 donation deed of Lambrecht Abbey, Henry was the eldest son of Count Otto von Worms (d. 1004), Duke of Carinthia from 978 to 983 and again from 995, and his wife Judith. Read more on Wikipedia

Since 2007, the English Wikipedia page of Henry of Speyer has received more than 30,048 page views. His biography is available in 17 different languages on Wikipedia making him the 7,718th most popular politician.

Page views of Henry of Speyers by language

Among politicians, Henry of Speyer ranks 7,683 out of 14,801. Before him are Ahmose-Meritamun, Lipit-Ishtar, Walthari, King Gong of Zhou, Catherine of Burgundy, and Sin Sukju. After him are Catherine I, Latin Empress, Duke Philipp of Württemberg, Eugen Ehrlich, Shibi Khan, Lucius Cornelius Scipio, and Boril of Bulgaria.