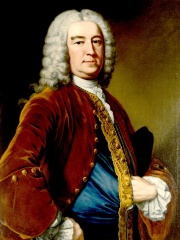 Henry Pelham (25 September 1694 – 6 March 1754) was a British Whig statesman, who served as Prime Minister of Great Britain from 27 August 1743 until his death. He was the younger brother of Thomas Pelham-Holles, 1st Duke of Newcastle, who served in Pelham's government and succeeded him as Prime Minister. Read more on Wikipedia

Since 2007, the English Wikipedia page of Henry Pelham has received more than 230,399 page views. His biography is available in 46 different languages on Wikipedia making him the 6,819th most popular politician.

Among people born in 1694, Henry Pelham ranks 11. Before him are Louis-Claude Daquin, Francis Hutcheson, Charlotte Christine of Brunswick-Wolfenbüttel, Paul of the Cross, Georg Brandt, and Theodore of Corsica. After him are Hermann Samuel Reimarus, Philip Stanhope, 4th Earl of Chesterfield, Leopold, Prince of Anhalt-Köthen, Count Palatine Joseph Charles of Sulzbach, George Edwards, and Richard Boyle, 3rd Earl of Burlington. Among people deceased in 1754, Henry Pelham ranks 10. Before him are Christian Wolff, Maria Anna of Austria, Henry Fielding, Jacopo Riccati, Giovanni Battista Piazzetta, and Maria Teresa Felicitas d'Este. After him are Edward Cave and Wu Jingzi.