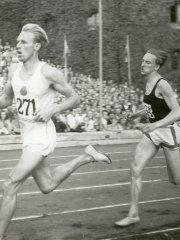 Knut Henry "Krylbo" Eriksson (23 January 1920 – 8 January 2000) was a Swedish middle-distance runner who specialized in the 1500 m event. In 1946 he finished second behind Lennart Strand, both at the national and European Championships. On 15 July 1947, at the national championships at Malmö, Eriksson and Strand had a very close 1500 m race. Read more on Wikipedia

Since 2007, the English Wikipedia page of Henry Eriksson has received more than 10,828 page views. His biography is available in 16 different languages on Wikipedia making him the 264th most popular athlete.