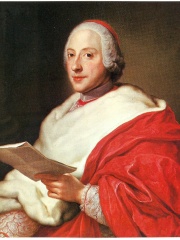 Henry Benedict Thomas Edward Maria Clement Francis Xavier Stuart, Cardinal Duke of York (6 March 1725 – 13 July 1807) was a Roman Catholic cardinal, as well as the fourth and final Jacobite heir to publicly claim the thrones of Great Britain and Ireland. Unlike his father, James Francis Edward Stuart, and brother, Charles Edward Stuart, Henry made no effort to seize the thrones. After Charles's death in January 1788 the Papacy did not recognise Henry as the lawful ruler of Great Britain and Ireland, but referred to him as the Cardinal Duke of York.He spent his life in the Papal States and had a long career in the clergy of the Roman Catholic Church, rising to become the Dean of the College of Cardinals and Cardinal-Bishop of Ostia and Velletri. Read more on Wikipedia

Among religious figures, Henry Benedict Stuart ranks 1,004 out of 2,238. Before him are Stephen Harding, Godfried Danneels, Yolanda of Poland, Henry, Catherine of Genoa, and Saint Chrysogonus. After him are Elon, William Booth, Henry of Latvia, Paul of the Cross, Alfredo Ottaviani, and Catherine de Vivonne, marquise de Rambouillet.