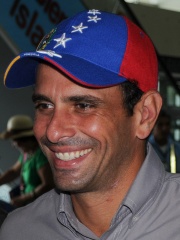 Henrique Capriles Radonski (Spanish pronunciation: [enˈrike kaˈpɾiles raˈðonski]; born 11 July 1972) is a Venezuelan politician and lawyer, who served as the 36th Governor of Miranda from 2008–2017. Born in Caracas on 11 July 1972, he received a degree in law from the Universidad Católica Andrés Bello, and later in tax law from the Central University of Venezuela. He first ventured into politics at age 26, when he became the youngest member ever elected to the Venezuelan parliament. Read more on Wikipedia

Since 2007, the English Wikipedia page of Henrique Capriles has received more than 171,930 page views. His biography is available in 49 different languages on Wikipedia making him the 10,198th most popular politician.