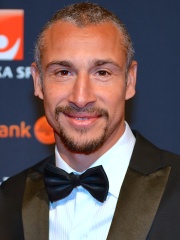 Henrik Edward Larsson (Swedish pronunciation: [ˈhɛ̌nːrɪk ˈlɑ̌ːʂɔn]; born 20 September 1971) is a Swedish professional football manager, most recently in charge of Helsingborgs IF, and former player, who played as a striker. Larsson began his career with Högaborg. In 1992, he moved to Helsingborg where in his first season his partnership up front with Mats Magnusson helped the club win promotion to Allsvenskan after 24 seasons in the lower tiers. Read more on Wikipedia

Since 2007, the English Wikipedia page of Henrik Larsson has received more than 2,597,357 page views. His biography is available in 51 different languages on Wikipedia making him the 443rd most popular soccer player.