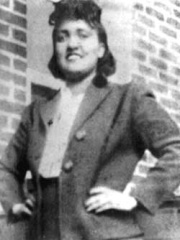 Henrietta Lacks (born Loretta Pleasant; August 1, 1920 – October 4, 1951) was an African-American woman whose cancer cells are the source of the HeLa cell line, the first immortalized human cell line and one of the most important cell lines in medical research. An immortalized cell line reproduces indefinitely under specific conditions, and the HeLa cell line continues to be a source of invaluable medical data to the present day.Lacks was the unwitting source of these cells from a tumor biopsied during treatment for cervical cancer at Johns Hopkins Hospital in Baltimore, Maryland, U.S., in 1951. These cells were then cultured by George Otto Gey who created the cell line known as HeLa, which is still used for medical research. Read more on Wikipedia

Since 2007, the English Wikipedia page of Henrietta Lacks has received more than 5,399,883 page views. Her biography is available in 31 different languages on Wikipedia making her the 43rd most popular celebrity.