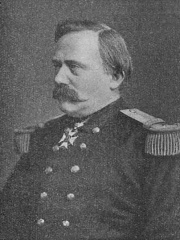 Henri-Alexis Brialmont (Venlo, 25 May 1821 – Brussels, 21 July 1903), nicknamed The Belgian Vauban after the French military architect, was a Belgian army officer, politician and writer of the 19th century, best known as a military architect and designer of fortifications. Brialmont qualified as an officer in the Belgian army engineers in 1843 and quickly rose up the ranks. He served as a staff officer, and later was given command of the district of the key port of Antwerp. Read more on Wikipedia

Among politicians, Henri Alexis Brialmont ranks 12,314 out of 15,577. Before him are Guilhermina Suggia, Thomas, 2nd Earl of Lancaster, Yukio Ozaki, Taneti Mamau, Tigran Sargsyan, and Emanuele Filiberto of Savoy, Prince of Venice. After him are Stephen I of Croatia, Christian Herter, Pascual Orozco, Irina Khakamada, A. K. Fazlul Huq, and Alexandre Trauner.