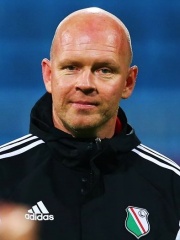 Henning Stille Berg (Norwegian pronunciation: [ˈhɛ̀nːɪŋ ˈstɪ̀lːə ˈbærɡ]; born 1 September 1969) is a Norwegian football manager and former player who played as a defender. He is the head coach of Cypriot First Division club AC Omonia. His career lasted from 1988 to 2004, most notably in the Premier League where he won titles with both Blackburn Rovers and Manchester United, becoming the first player to win the Premier League with two clubs. Read more on Wikipedia

Since 2007, the English Wikipedia page of Henning Berg has received more than 400,497 page views. His biography is available in 29 different languages on Wikipedia making him the 2,508th most popular soccer player.

Among SOCCER PLAYERS In Norway