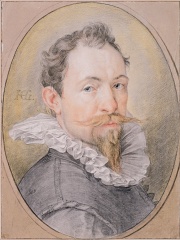 Hendrick Goltzius, or Hendrik, (German: [ˈgɔltsi̯ʊs]; Dutch: [ˈɣɔltsʲiœs]; January or February 1558 – 1 January 1617) was a German-born Dutch printmaker, draftsman, and painter. He was the leading Dutch engraver of the early Baroque period, or Northern Mannerism, lauded for his sophisticated technique, technical mastership and "exuberance" of his compositions. According to A. Hyatt Mayor, Goltzius "was the last professional engraver who drew with the authority of a good painter and the last who invented many pictures for others to copy". Read more on Wikipedia

Hendrik Goltzius was a Dutch printmaker and engraver. He is most famous for his engravings of biblical and mythological scenes.

Among people born in 1558, Hendrik Goltzius ranks 3. Before him are Michael the Brave and Maximilian III, Archduke of Austria. After him are Ishikawa Goemon, Oda Nobutaka, Olivier van Noort, François de Bourbon, Prince of Conti, Thomas Kyd, Robert Greene, and Thomas Lodge. Among people deceased in 1617, Hendrik Goltzius ranks 8. Before him are Pocahontas, John Napier, Rose of Lima, Francisco Suárez, Concino Concini, and Emperor Go-Yōzei. After him are David Fabricius, 4th Dalai Lama, Fausto Veranzio, Dorothea of Denmark, Duchess of Brunswick-Lüneburg, Giovanni Botero, and Prospero Alpini.