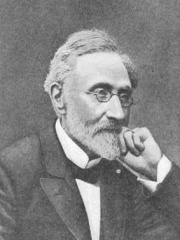 Heinrich Graetz (German: [ɡʁɛts]; 31 October 1817 – 7 September 1891) was amongst the first historians to write a comprehensive history of the Jewish people from a Jewish perspective. Born Tzvi Hirsch Graetz to a butcher family in Xions (now Książ Wielkopolski), Grand Duchy of Posen, in Prussia (now in Poland), he attended Breslau University, but since Jews at that time were barred from receiving Ph.D.s there, he obtained his doctorate from the University of Jena. After 1845 he was principal of the Jewish Orthodox school of the Breslau community, and later taught history at the Jewish Theological Seminary of Breslau (now Wrocław, Poland). Read more on Wikipedia

Among historians, Heinrich Graetz ranks 171 out of 339. Before him are Simon Dubnow, Michael Attaleiates, Peter Andreas Munch, Arno Peters, Festus, and Robert Conquest. After him are Bernard Desclot, Hermann Abert, Paisius of Hilendar, Edgar Quinet, Philistus, and Edward Luttwak.

Among HISTORIANS In Poland