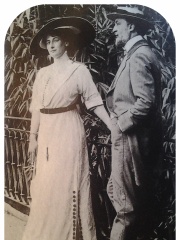 Hector Guimard (French pronunciation: ​[ɛktɔʁ ɡimaʁ], 10 March 1867 – 20 May 1942) was a French architect and designer, and a prominent figure of the Art Nouveau style. He achieved early fame with his design for the Castel Beranger, the first Art Nouveau apartment building in Paris, which was selected in an 1899 competition as one of the best new building facades in the city. He is best known for the glass and iron edicules or canopies, with ornamental Art Nouveau curves, which he designed to cover the entrances of the first stations of the Paris Metro.Between 1890 and 1930, Guimard designed and built some fifty buildings, in addition to one hundred and forty-one subway entrances for Paris Metro, as well as numerous pieces of furniture and other decorative works. Read more on Wikipedia

Hector Guimard is most famous for his Art Nouveau style of architecture. He was a French architect who designed the Castel Béranger and the Parisian metro.