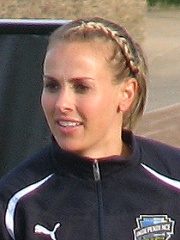 Heather Mitts Feeley (born June 9, 1978), née Heather Blaine Mitts, is an American former professional soccer defender. Mitts played college soccer for the University of Florida, and thereafter, she played professionally in the Women's Professional Soccer (WPS) league; for the Philadelphia Charge, Boston Breakers, Philadelphia Independence and Atlanta Beat. She is a three-time Olympic gold medalist, and was a member of the U.S. women's national team. She played in four matches in the 2011 FIFA Women's World Cup, where the U.S. Read more on Wikipedia

Since 2007, the English Wikipedia page of Heather Mitts has received more than 186,485 page views. Her biography is available in 19 different languages on Wikipedia making her the 11,182nd most popular soccer player.