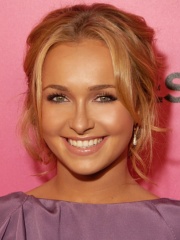 Hayden Lesley Panettiere (; born August 21, 1989) is an American actress, model, and singer. She is best known for her starring role as Claire Bennet on the NBC superhero series Heroes (2006–2010) and Juliette Barnes in the ABC/CMT musical drama series Nashville (2012–18), the latter of which earned her two nominations for the Golden Globe Award for Best Supporting Actress – Series, Miniseries or Television Film.A native of New York, she first appeared in a commercial at the age of eleven months. Her full-time acting career began by playing Sarah Roberts on One Life to Live (1994–1997) and Lizzie Spaulding on Guiding Light (1996–2000). Read more on Wikipedia

Since 2007, the English Wikipedia page of Hayden Panettiere has received more than 12,935,871 page views. Her biography is available in 54 different languages on Wikipedia making her the 4,245th most popular actor.