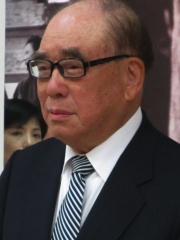 Hau Pei-tsun (Chinese: 郝柏村; pinyin: Hǎo Bócūn, 8 August 1919 – 30 March 2020) was a Chinese politician who was the Premier of the Republic of China (ROC) from 1 June 1990 to 27 February 1993, and the longest-serving Chief of the General Staff of the Republic of China Armed Forces from 1 December 1981 to 4 December 1989. On 6 July 2017, Hau attended an academic meeting in Nanjing about the history of the Second Sino-Japanese War, making him the first former ROC premier to visit Mainland China since the end of the Chinese Civil War in 1949. Read more on Wikipedia

Among politicians, Hau Pei-tsun ranks 7,754 out of 15,710. Before him are John, Constable of Portugal, Malam Bacai Sanhá, Kaʻahumanu, Andrea Contarini, Ilija Garašanin, and Radu I of Wallachia. After him are Estanislao Figueras, Prince Frederick William of Hesse-Kassel, Girolamo Aleandro, Prithvi Narayan Shah, Fakhr al-Din II, and Alfred Escher.