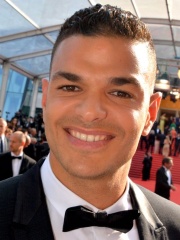 Hatem Ben Arfa (Arabic: حاتم بن عرفة‎, French pronunciation: ​[atɛm bɛnaʁfa]; born 7 March 1987) is a French professional footballer who plays as a winger and an attacking midfielder for Spanish club Valladolid. Known for his dribbling ability, he has been described as "one of the best-rated talents in France" but has been criticised by the media and players alike for lacking discipline.Ben Arfa's career started in the Île-de-France region, where he trained at AC Boulogne-Billancourt and Versailles. In 1999, he was selected to attend the Clairefontaine academy. Read more on Wikipedia

Since 2007, the English Wikipedia page of Hatem Ben Arfa has received more than 2,344,109 page views. His biography is available in 43 different languages on Wikipedia making him the 1,677th most popular soccer player.