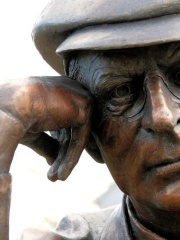 Henry George "Harry" Ferguson (4 November 1884 – 25 October 1960) was an Irish-born British mechanic and inventor who is noted for his role in the development of the modern agricultural tractor and its three point linkage system, for being the first person in Ireland to build and fly his own aeroplane, and for developing the first four-wheel drive Formula One car, the Ferguson P99. Today his name lives on in the name of the Massey Ferguson company. Read more on Wikipedia

Since 2007, the English Wikipedia page of Harry Ferguson has received more than 248,591 page views. His biography is available in 15 different languages on Wikipedia. Harry Ferguson is the 264th most popular inventor.