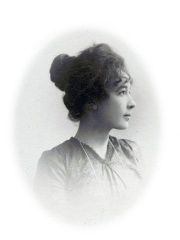 Harriet Sofie Bosse (19 February 1878 – 2 November 1961) was a Swedish–Norwegian actress. A celebrity in her day, Bosse is now most commonly remembered as the third wife of the playwright August Strindberg. Bosse began her career in a minor company run by her forceful older sister Alma Fahlstrøm in Kristiania (now Oslo, the capital of Norway). Read more on Wikipedia

Since 2007, the English Wikipedia page of Harriet Bosse has received more than 81,929 page views. Her biography is available in 15 different languages on Wikipedia. Harriet Bosse is the 3,431st most popular actor.