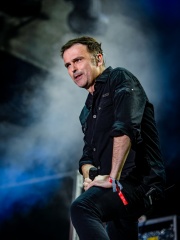 Hans Jürgen "Hansi" Kürsch (born August 10, 1966) is a German singer, songwriter, record producer and former bass guitarist, best known as a member of the power metal band Blind Guardian. One of the founders of the band, he has been its lead vocalist since its creation in 1984, and also acted as the band's bass guitarist until 1996. He is also the lead vocalist of Demons and Wizards, a side-project with Iced Earth guitarist Jon Schaffer. Read more on Wikipedia

Since 2007, the English Wikipedia page of Hansi Kürsch has received more than 264,635 page views. His biography is available in 21 different languages on Wikipedia making him the 1,211th most popular singer.