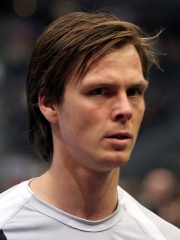 Hans Óttar Lindberg Tómasson (born 1 August 1981) is a Danish handball player of Icelandic descent for Füchse Berlin and the Danish national team.He won the 2008 European Men's Handball Championship and the 2012 European Men's Handball Championship with the Danish national team. He currently plays for Füchse Berlin.He is of Icelandic descent as both of Lindberg's parents, Tómas Erling Lindberg and Sigrún Sigurðardóttir, are Icelandic. His parents played handball in Iceland with Fimleikafélag Hafnarfjarðar. Read more on Wikipedia

Since 2007, the English Wikipedia page of Hans Lindberg has received more than 46,293 page views. His biography is available in 16 different languages on Wikipedia making him the 71st most popular handball player.

Most Popular Handball Players in Wikipedia

Among HANDBALL PLAYERS In Denmark