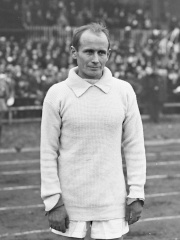 Juho Pietari "Hannes" Kolehmainen (Finnish: [ˈhɑnːes ˈkolehmɑi̯nen] (listen); 9 December 1889 – 11 January 1966) was a Finnish four-time Olympic Gold medalist and a world record holder in middle- and long-distance running. He was the first in a generation of great Finnish long-distance runners, often named the "Flying Finns". Kolehmainen competed for a number of years in the United States, wearing the Winged Fist of the Irish American Athletic Club. He also enlisted in the 14th Regiment of the National Guard of New York, and became a U.S. Read more on Wikipedia

Hannes Kolehmainen is most famous for being the first Finn to win a gold medal in the Olympics, in the 1924 Winter Olympics.

Among athletes, Hannes Kolehmainen ranks 20 out of 3,055. Before him are Ray Ewry, Stanisława Walasiewicz, Robert Shavlakadze, Felix Baumgartner, Usain Bolt, and Fanny Blankers-Koen. After him are Iolanda Balaș, Coroebus of Elis, Bobby Morrow, Wilma Rudolph, Sohn Kee-chung, and Ben Johnson.

Among ATHLETES In Finland