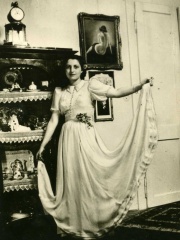 Hannah Szenes (often anglicized as Hannah Senesh or Chanah Senesh; Hebrew: חנה סנש‎; Hungarian: Szenes Anna; July 17, 1921 – November 7, 1944) was a poet and a Special Operations Executive (SOE) member. She was one of 37 Jewish SOE recruits from Mandate Palestine parachuted by the British into Yugoslavia during the Second World War to assist anti-Nazi forces and ultimately in the rescue of Hungarian Jews about to be deported to the German death camp at Auschwitz.Szenes was arrested at the Hungarian border, then imprisoned and tortured, but refused to reveal details of her mission. She was eventually tried and executed by firing squad. Read more on Wikipedia

Among writers, Hannah Szenes ranks 1,609 out of 5,794. Before her are Pierre Plantard, Ida Laura Pfeiffer, Elizabeth Bishop, Ken Wilber, Bhāsa, and Paul Gerhardt. After her are Notker the Stammerer, Josef Čapek, Upton Sinclair, Ghassan Kanafani, Abu Tammam, and Aphrahat.

Among WRITERS In Hungary