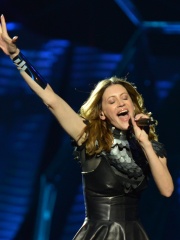 Hannah Leah Mancini (born 22 January 1980), also known as Stella Mercury or simply Hannah, is an American singer and songwriter who works and lives in Slovenia. She has been heavily involved in dance, nu disco and electronic scenes there and worked with artists and producers in these genres. Hannah's first music industry experiences had her on multiple soundtracks for Disney films and the opportunity to collaborate with Grammy winning producer, Larry Klein. Read more on Wikipedia

Among singers, Hannah Mancini ranks 2,588 out of 3,541. Before her are Jermaine Dupri, Travie McCoy, Zhou Mi, Kurupt, Brandon Boyd, and Bilal Hassani. After her are Eve, Ewa Farna, Ledina Çelo, Tamara Gachechiladze, Chamillionaire, and Peter Andre.