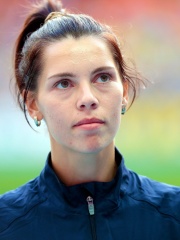 Hanna Victorivna Knyazyeva-Minenko (also spelled as Knyazheva, Knyazeva, or Kniazeva, Ukrainian: Ганна Князєва-Міненко, Hebrew: חנה קנייזבה-מיננקו‎; born 25 September 1989) is a former Ukrainian and a current Israeli triple jumper and long jumper. She established a personal best in August 2015 of 14.78 meters (m) in the triple jump while winning the silver medal at the 2015 World Championships in Athletics. She competed for her native Ukraine at the 2012 Summer Olympics in the women’s triple jump event, coming in fourth with a jump of 14.56 m.She moved to Israel and became an Israeli citizen in early 2013, and has represented Israel since then. Read more on Wikipedia

Among ATHLETES In Ukraine