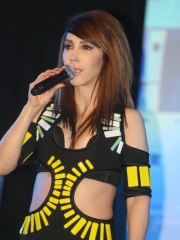 Makbule Hande Özyener (born 12 January 1973), better known by her stage name Hande Yener, is a Turkish singer. She made her debut in the early 2000s, and since then has become a prominent figure of Turkish pop music with numerous songs that rose to the top of music charts. Alongside her music career, she is also known for her choice of clothes and has renewed her image multiple times over the years. Read more on Wikipedia

Since 2007, the English Wikipedia page of Hande Yener has received more than 110,184 page views. Her biography is available in 75 different languages on Wikipedia making her the 525th most popular singer.