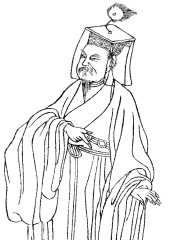 Han Yu (Chinese: 韓愈; 768 – 25 December 824), courtesy name Tuizhi (Chinese: 退之), and commonly known by his posthumous name Han Wengong (韓文公), was a Chinese essayist, poet, philosopher, and politician during the Tang dynasty who significantly influenced the development of Neo-Confucianism. Described as "comparable in stature to Dante, Shakespeare or Goethe" for his influence on the Chinese literary tradition, Han Yu stood for strong central authority in politics and orthodoxy in cultural matters. He is often considered to be among China's finest prose writers. Read more on Wikipedia

Han Yu is most famous for his advocacy of the use of the vernacular language in literature.

Among philosophers, Han Yu ranks 394 out of 1,081. Before him are Paul Tillich, Saadia Gaon, Karl Rahner, John of Salisbury, Johannes Althusius, and Guan Zhong. After him are Eubulides, Paul Natorp, Nicephorus Gregoras, Heinrich Rickert, Luce Irigaray, and Christian Thomasius.