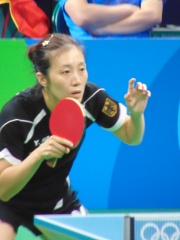 Han Ying (born 29 April 1983 as 韩莹) is a female table tennis player representing Germany since 2010. A specialist in defensive chopping, a style in decline ever since the mid-1990s, she is one of a few surviving defensive players active at the ITTF World Tour level as of 2021.Her most important achievement are the Olympic silver medal in women's team in 2016 and the fourth place in the same event in 2020. Read more on Wikipedia

Since 2007, the English Wikipedia page of Han Ying has received more than 115,553 page views. Her biography is available in 16 different languages on Wikipedia. Han Ying is the 59th most popular table tennis player, the 985th most popular biography from China and the 21st most popular Chinese Table Tennis Player.

Among TABLE TENNIS PLAYERS In China