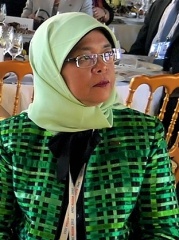 Halimah Binte Yacob (born 23 August 1954) is a Singaporean politician. She is the incumbent president of Singapore since the 2017 Singapore presidential election.Halimah won in an uncontested election, as no other presidential candidate was issued the Certificate of Eligibility. She is the first female president in the country's history. Read more on Wikipedia

Halimah Yacob is most famous for being the first female president of Singapore.

Among politicians, Halimah Yacob ranks 3,330 out of 15,710. Before her are Zwentibold, Livilla, Jani Beg, Sancho III of Castile, Agnes of France, Byzantine Empress, and Sultan Husayn Bayqara. After her are Bettino Craxi, Eric XI of Sweden, Emperor Kōgen, Albert of Saxony, Mathilde Kschessinska, and Fulvia.