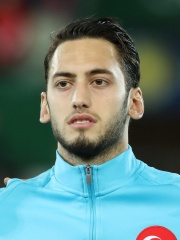 Hakan Çalhanoğlu (Turkish pronunciation: [ˈhaːkan ˈtʃaɫhanoːɫu], born 8 February 1994) is a Turkish professional footballer who plays as an attacking midfielder for Serie A club Inter Milan and the Turkey national team. He began his career at German second division club Karlsruher SC in 2010 and moved to top-flight side Hamburg two years later, spending another season back at his first club on loan. His performance in his first Bundesliga season earned him a €14.5 million transfer to Bayer Leverkusen in 2014. Read more on Wikipedia

Among people born in 1994, Hakan Çalhanoğlu ranks 12. Before him are Dakota Fanning, Kai, Emre Can, Harry Styles, Saoirse Ronan, and Memphis Depay. After him are Otto Warmbier, Raheem Sterling, Dimash Kudaibergen, Marquinhos, Benjamin Mendy, and Maluma.