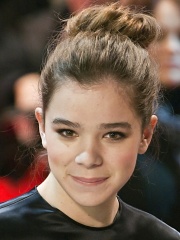 Hailee Steinfeld (born December 11, 1996) is an American actress and singer. She had her breakthrough with the western drama film True Grit (2010), which earned her nominations for the Academy Award, BAFTA Award and the SAG Award for Best Supporting Actress. Steinfeld rose to mainstream prominence for her lead roles in Ender's Game (2013), Romeo & Juliet (2013), Begin Again (2013), and 3 Days to Kill (2014). Read more on Wikipedia

ComicBook.com
Hawkeye Star Hailee Steinfeld Picks Her Favorite Marvel Movie
Hailee Steinfeld actually picked one Marvel movie above all the others. D23's official podcast sat down with the Hawkeye star to discuss her entry into the MCU. A lot of fans debate the "best" movie in the Marvel Studios catalog, but there are a range of answ…
Aaron Perine