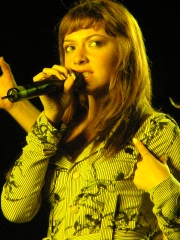 Hadise Açıkgöz (born 22 October 1985) is a Turkish-Belgian singer-songwriter, dancer, and television personality. Born and raised in Belgium, her family is of Lezgin-Kumyk origin who settled in Sivas, Turkey. In 2003, she participated in the Belgian singing competition show Idool 2003, but rose to fame after releasing her debut album Sweat in 2005. Read more on Wikipedia

Page views of Hadises by language

Among singers, Hadise ranks 1,311 out of 3,541. Before her are Jørn Lande, Rob Pilatus, Urszula Dudziak, Andy Bell, Conny Vandenbos, and Hansi Kürsch. After her are Carlos Marín, Teddy Pendergrass, Oliver Sykes, Ben Harper, Duffy, and Yesung.