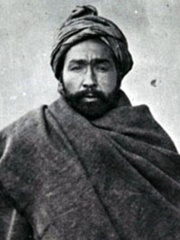 Habibullāh Kalakāni (Dari: حبیب‌الله کلکانی‎, 19 January 1891 – 1 November 1929), also known by his nickname "Bacha-ye Saqao" (also romanized Bachai Sakao; literally son of the water carrier) was a ruler of Afghanistan from 17 January to 13 October 1929, as well as a leader of the Saqqawists. During the Afghan Civil War, he captured vast swathes of Afghanistan and ruled Kabul during what is known in historiography as the "Saqqawist period". He was an ethnic Tajik. Read more on Wikipedia

Since 2007, the English Wikipedia page of Habibullāh Kalakāni has received more than 164,300 page views. His biography is available in 26 different languages on Wikipedia making him the 3,924th most popular politician.

Among politicians, Habibullāh Kalakāni ranks 3,901 out of 14,801. Before him are Zhelyu Zhelev, Emperor Go-Shirakawa, Aaron Burr, Archduchess Eleanor of Austria, Artaphernes, and Claudia Felicitas of Austria. After him are Aelia Eudoxia, Wilfried Martens, Baldwin V, Count of Flanders, Infanta Maria Antonia of Portugal, Emperor Shang of Han, and Leonnatus.