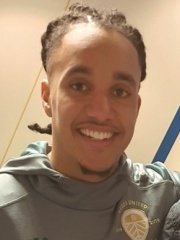 Hélder Wander Sousa de Azevedo e Costa (born 12 January 1994) is a Portuguese professional footballer who plays as a winger for Premier League club Leeds United and the Portugal national team. Formed at Benfica, with which he made single Taça da Liga appearance, Costa spent most of his career abroad, including at Deportivo de La Coruña in La Liga and Monaco in Ligue 1. He also spent several years in England with Wolverhampton Wanderers and currently Leeds United, winning the EFL Championship with both. Read more on Wikipedia

Since 2007, the English Wikipedia page of Hélder Costa has received more than 58,543 page views. His biography is available in 16 different languages on Wikipedia making him the 11,607th most popular soccer player.

Among SOCCER PLAYERS In Angola