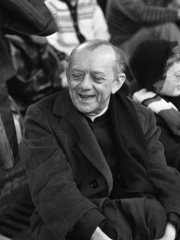 Dom Hélder Pessoa Câmara (Portuguese: [dõ ˈɛwdeɾ peˈsoɐ ˈkɐ̃mɐɾɐ]; 7 February 1909 – 27 August 1999) was a Brazilian Catholic Archbishop. He was the Archbishop of Olinda and Recife, serving from 1964 to 1985, during the military regime of the country. Câmara was an advocate of liberation theology. Read more on Wikipedia

Since 2007, the English Wikipedia page of Hélder Câmara has received more than 167,157 page views. His biography is available in 32 different languages on Wikipedia making him the 708th most popular religious figure.

Among religious figures, Hélder Câmara ranks 709 out of 2,001. Before him are Sen no Rikyū, Lars Levi Laestadius, Isaac of Nineveh, Antipope Boniface VII, Patriarch Kirill of Moscow, and Columba. After him are Fatima al-Fihri, Nicodemus, William of Gellone, Hashim ibn Abd Manaf, Primož Trubar, and John of Rila.

Among RELIGIOUS FIGURES In Brazil